History of Vampire Romance
Vampire fiction is rooted in the vampire craze of the 1720's and 1730's. Think Dracula was the first vampire story with romantic tendencies? I suggest you read:
The Vampyre is a short story written by John William Polidori and is a progenitor of the romantic vampire genre. Published in 1819, it is more like the vampire romance stories of today. Polidori was one of the group where Lord Byron suggested they each write a ghost story. Out of which evolved The Vampyre as well as Mary Shelly's Frankenstein. 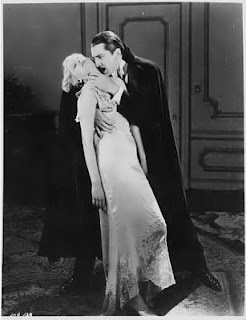 Dracula by Bram Stoker. Published in 1897. The classic vampire story. I found the way Stoker told the story using letters connects you more to the story than a straight narrative. In its day, it was not considered a romance. One can not deny the sexual tension throughout, yet he, himself defended his work stating there was no overt sex acts described.
Bram stoked the fires with sexual innuendos and metaphors replacing sex with blood lust, including a man succumbing to three vivacious vampiress's, a free spirited Lucy giving herself to Dracula in his half-man half-wolf form and an innocent heroine drawn to Dracula's evil seduction. The vivid characterization of Dracula, as a monster of the night as well as having a range of emotions and his courtship of innocent Mina was titillating in its day. Stoker meant Dracula to be a warning against lust.

Nosferatu.  This film, released in 1922 was an unauthorized adaption of Stoker's Dracula. Not a romance, however the bedroom scene was intense and one can only wonder how the usually staid audience of that time received it. Dracula, as well as Nosferatu was, no doubt, two driving forces that made vampire a household name. 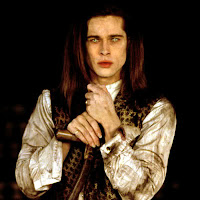 Interview with a Vampire. Anne Rice (1976). No one can deny having two handsome vampires in one story is a turn on. Rice pushed the envelope by having them so engaged with what would become a woman stuck in a girl's body and with homosexual undertones. While no overt sex, no one can deny they loved and hated with a passion that for me, anyways, has never been duplicated in another Anne Rice novel.


Though I am skipping those that spanned this time to the vampire romance novels of today, I am sure there is some worthy of mention if anyone would like to submit any to me.
A brief mention of shows like Dark Shadows, a 1960 vampire soap opera, soon to be a new movie collaboration with Johnny Depp and Tim Burton and Buffy the Vampire Slayer, the Vampire Diaries of its day.

I am rating the following on two levels. Love: how much they
make you care if they have a happy ending and sexual intensity. I am not including bad language, it's a given.
1. mild  2. warm  3. steamy  4. hot  5. red hot

The Sookie Stackhouse Series by Charlaine Harris.  This is the book series True Blood is based on. While the TV show has deviated from the books, both are wild romps in a hot setting full of love and, um, blood. They books will keep you reading and rooting for darkly handsome Bill and the blonde Viking vampire, Eric while Sookie helps turn their already strange life upside down. And that's just the beginning.
Love: 3
One can soon tell Sookie's love life is going to be divided.
Sexual intensity: 4-5.

The Dark Hunter Series by Sherrilyn Kenyon.  Follow the lives of these guardians of mankind as they balance their immortality with a human world and find love where none is allowed. The first novel, Fantasy Lover (2002) is less paranormal than the ones that follow but still a good read. I was hooked.
Love: 4
Sexual intensity 3

The Black Dagger Brotherhood Series by JR Ward. For the serious vampire romance reader. Action-romance. With her down to earth no frill's style, this writer captures you and brings you into a world so real you'll have to claw your way out. But who'd want to? The men here are big, sexy and oh so male. The action doesn't stop in or out of the bedroom. Catch her first book in the series, Dark Lover.
Love 5
Sexual intensity 4-5

The Maker's Song Series more known for its first book, A Rush of Wings, by Adrian Phoenix. I resisted this book for a long time. A female FBI agent? A rock star? Then I read it. LOVED it. Great characterization, good story, much more paranormal than I thought it would be. The second book, In the Blood is just as good.
Love 5
Sexual intensity 4

A strong mention of Karen Marie Moning and her Highlander Series. They are a time-travel series, but I love them. And her Fever Series about MacKayla, a woman drawn into a strange world of a mysterious man, a fae who is so handsome he is beautiful, and more, in the hunt for her sisters killer. If you don't always like knowing what the next paragraph will bring, these are the books for you.

My Wicked Enemy by Carolyn Jewel. First in a series. After I read this one, I immediately went to the store to look for more.
Love 4
Sexual intensity 4

The above are my favs, but chances are if you are a paranormal reader you are familiar with these authors. These are more action/romance than straight romances, however I do have some I follow.
Primal Series by Susan Sizemore. You will not be able to put these stories down. First in the series: I Burn For You. Her latest: Primal Instincts available 2010.
Love 4
Sexual intensity 4

The Immortals After Dark Series by Kresley Cole. Hunky vampires and the women who tame them. One of those authors I only see the name and grab the next book. On her site, (click on name for link) she lists Playing Easy to Get as the first book in this series, however the first one I read was No Rest for the Wicked.

I haven't read many books lately. Because I've been writing!
An excerpt from my Keely's Vampire Warrior:
Mother One!  Mother One was before him! Her small hands grasping his temples in a grip even he could no' break. Where he be? Yet another world? An inky darkness like his long gone home now replaced the lavender skies that had colored his world for an eon. From his brief glimpse around that be where the resemblance ended.
Men. There be people here. Was his solitude at an end? What did Mother One have in store for him now? A blast of images shot through his mind, faster than an arrow. A girl. Hurt. Bleeding. A low steady thumping reverberated through him, starting his own heart on a fast answering rhythm.
Pain.
Whispers intertwined throughout. Mother One. Girl. Laying. Match. Save. TASKILL GEIR? Mother One blinked and eyed him as if seeing him for the first time.
As fast as they invaded his mind the visions left, leaving him dazed. His short blade slipped from his numb fingers to fall with a clang that echoed between close walls. His vision cleared. It truly was Mother One! Still beautiful. The images she pressed into his mind hit him.
Behind him. Somehow he knew, she be behind him. He could feel her there.
.... (some taken out here)
"Ye want me to what?" he graveled, his voice parched from lack of use. "Now?" Catching movement from the corner of his eye, he swung back to find the man holding the girl leaning into the light, eyeing him with murder intent.
He reached for his blade in disbelief. It was no' there. "Doe?" Suddenly, he was looking down the barrel of what sure be some kind of weaopn and had no doubt his once close friend still wanted him dead.
Hope you liked! You can read more at my myspace vampromancer site. Unfortunately, I've had no bites from agents on this piece. It is a LONG story because it sets up what I hoped was going to be a series, however most agents/publishers will not take a chance on such a large manuscript from an unknown writer. Open to feed back and wondering if I should set it up for e-book sale.

A sample from  my second piece not related to the Naith Vampire series, Master & Slave:
Blood oozed from him. It pooled on the bottom of the coffin between them. Not wanting to waste it, she hesitantly rolled over and licked some off the cushioned bottom. It ran through her veins making her feel stronger. Smelled good, too. Like Master. She made a face. Like wolf, too.
Confused, she leaned over and sniffed his skin. He smelled a lot like wolf, too.
"What the? Are you doing?" Master muttered.
She looked up to find arctic blue eyes narrowed on her. Shrugging she scooted away. "It was there." She wedged herself against the coffin wall. Master started at her until his eyelids drooped shut. When he was hurt, he would sometimes sleep for nights. She had never seen him heal before.
She avidly waited for the miracle of seeing skin grow back together. Except, nothing happened other than the pool of blood growing larger. Spreading across the cushioned bottom, it flowed under her, making her skin stick to the satin material beneath her. She had nowhere to move, however. Time ticked by. She became worried. Reaching out a hand, she gently shook his shoulder.
"Master," she whispered. "Wake up."
He slowly lifted his eyelids. They were not their usual luminescence. He started through her as if not aware of her. They glow in his eyes faded. She held her breath. Could he be dying? Where would she go? Who would she belong to? Would she be...free?
His hand suddenly struck out and grasped her shoulder. "What are you thinking?" he hoarsed. He swallowed hard. "Feed me, Slave." He tried to pull her closer. "Come here and feed your master or I'll kill you before I die."
Not for the faint hearted, and yes it is a romance. Only the few that have read the entire story has said it is a 5 for Love. And I can tell you it's 5 for sexual intensity.
INTERESTING LINKS


Gothic Beauty Magazine -  Check them out on Facebook.
Gothic Styles.com
The Pyramid Collection I just found this one.
Gorey Details  There is a lot here to see. Check out their jewelry
Nox Arcania  Music to set the mood by. Check them out on youtube.
Heavenly Creatures Highly recommended gothic music. Check out the Vald Tepes soundtrack.
Artwork by Victoria Frances  Her Gothic renditions of vampires are sweet and romantic.

I hope you enjoyed my blog.
Comments and suggestions welcome.
My other websites: